This work is the earliest-known individual self-portrait of Rubens. It is a preparatory study for a self-portrait that he incorporated in his most important commission at the court of the Gonzaga, namely the decorative programme for the capella maggiore of the Jesuit church in Mantua in Northern Italy.

Although Rubens was taken on as court painter to the Gonzagas’ shortly after arriving in Italy, it took four years for him to land a truly major commission. He painted three immense canvases for the Jesuit church in 1604–05: The Gonzaga Family Adoring the Trinity, The Baptism of Christ and The Transfiguration. Rubens was so honoured by the commission that he included himself in the central scene, in which the Gonzaga family is shown worshipping the Holy Trinity. By incorporating his own likeness in the painting, Rubens immortalized himself as its maker – a ‘visual signature’ that served as the young artist’s first calling card.

The canvases were taken from the church by Napoleon’s troops at the beginning of the nineteenth century and are now spread across a variety of European museums. The large central work has, moreover, been cut down and now survives only in a fragmentary and disfigured state. Rubens’ self-portrait has likewise been lost. The preliminary study has, however, been preserved and now becomes the fifth identified self-portrait by Rubens and the second on display at the Rubens House. The preparatory self-portrait recently re-emerged and – having been the subject of controversy in the past – has been attributed to Rubens once more by Ben van Beneden and Arnout Balis. 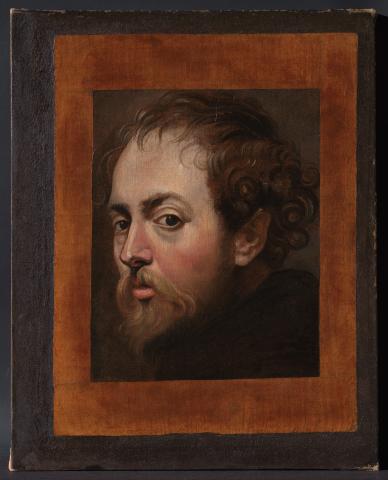 The Rubens House has a remarkable new exhibit to unveil: a recently rediscovered Rubens self-portrait. It is one of five new loans to add to the lustre of the artist’s former residence.