The Rubens House is showing two unique loaned works this autumn: The Massacre of the Innocents, an early masterpiece by Rubens (1577–1640) and the most expensive Rubens ever, will be on temporary display at the museum from 26 September. An outstanding early work by Rubens’ most talented pupil, Anthony van Dyck (1599–1641), will also be on show. The Head of the Apostle Matthew has been provided on permanent loan by the King Baudouin Foundation – the only composition from the famous Böhler series displayed in a Belgian public collection.

Rubens: The Massacre of the Innocents

Rubens’ monumental Massacre of the Innocents – one of The Art Gallery of Ontario’s most outstanding exhibits – has temporarily returned home. The painting is an early work by Rubens and swiftly entered a succession of prestigious collections. Having been wrongly attributed to a variety of masters since the eighteenth century, experts clearly identified Rubens’ hand in the Baroque formal idiom in 2001. The discovery of a Rubens previously believed lost was international news and the work was put up for sale. It was auctioned at Sotheby’s in London in 2002 for the record amount of £ 49.5 million – the highest price at that point to be paid for an old master. The Massacre of the Innocents was purchased by the Canadian businessman and collector Ken Thomson, who donated it to The Art Gallery of Ontario in Toronto. The painting has not travelled since 2008 and is still the most expensive ever painting by Rubens. 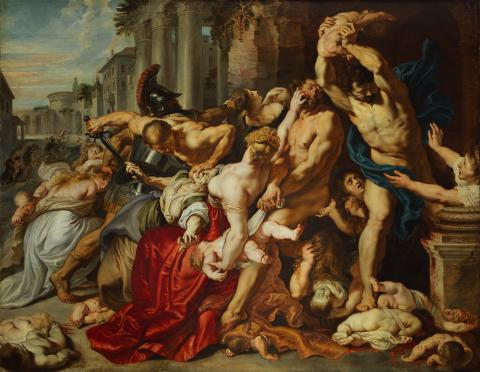 The work presents a scene from the Bible. Following the Nativity of Jesus, King Herod learns that a new king has been born in Bethlehem and, fearing for his power, he orders the killing of all boys aged two or younger. To spare their child this horrific fate, Jesus’ parents flee to Egypt with the infant. The ‘Massacre of the Innocents’ was a popular theme in painting. It was depicted especially frequently during the Renaissance, when artists developed a fascination for Antiquity.

References to Antiquity and the Renaissance

Rubens painted his version of the episode around 1610; shortly after returning from Italy. The work is packed with drama and violence, while the numerous allusions to Antiquity and the Italian Renaissance enabled the young artist to present his credentials as an accomplished pictor doctus. He took inspiration for the crouching mother, for instance, from the antique nude Venus in the Gonzaga family collection in Mantua, where he had been able to study it as court painter. The soldier in the centre of the composition, meanwhile, who is about to stab an old woman with his sword, is borrowed from The Wrestlers, a sculpture Rubens saw at the Villa Medici in Rome. His comrade, whose eyes are clawed at by the semi-nude young woman, is based in turn on the celebrated Laocoön group, which Rubens sketched in 1602 during his visit to the papal collections in the Vatican. The deathly pale corpses of the murdered children strongly resemble the marble sculpture of three sleeping putti that Rubens saw at the Villa Borghese in Rome. References to the Italian Renaissance are also clearly visible: Rubens drew on the figure of Christ in Michelangelo’s Resurrection, for example, for the soldier on the right who is about to dash a child against the stonework. However, unlike Michelangelo’s Christ, who conquers death, Rubens’ soldier is its cause. The most famous and certainly the most widespread representation of the Massacre of the Innocents was probably Marcantonio Raimondi’s engraving after a design by Raphael. Compared with the latter’s graceful composition, Rubens’ interpretation is more powerful, true to life, and hence considerably more gruesome. Rubens also appears to have looked at examples in Antwerp: the diagonal composition of the architecture in the background, for instance, shows similarities with a composition by the Antwerp master Frans Floris.

Van Dyck: the Head of the Apostle Matthew

Having funded the restoration of this deftly executed Apostle’s head at the Royal Institute for Cultural Heritage (KIK-IRPA) in Brussels, the Foundation has now placed it on permanent loan at the Rubens House. The action firmly reflects its mission to preserve, protect and valorize important works from the nation’s cultural heritage and to make them accessible to the public. 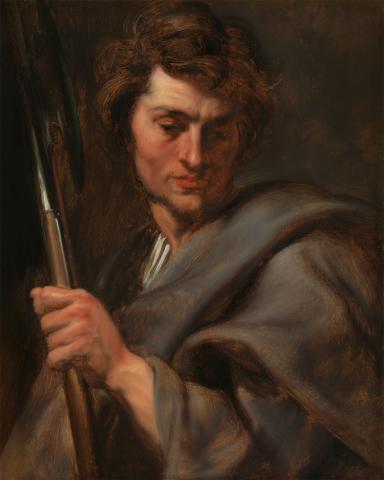 Courtesy of the King Baudouin Foundation, the Rubens House is also showing an early work by Anthony van Dyck, representing the Apostle Matthew as a powerful yet contemplative male figure. The panel, part of a series of Apostle paintings, was recently acquired by the King Baudouin Foundation through a bequest and is the only Van Dyck Apostle still in Belgium. Having funded the restoration of this deftly executed Apostle’s head at the Royal Institute for Cultural Heritage (KIK-IRPA) in Brussels, the Foundation has now placed it on permanent loan at the Rubens House. The action firmly reflects its mission to preserve, protect and valorize important works from the nation’s cultural heritage and to make them accessible to the public.