The painting was done in enamel "en grisaille" (in shades of grew). By the mid-1550s the French town of Limoges was especially reputed for this form of painting. Painting glass, earthenware or metal objects in enamel was considered a craft in its own right. Only certain specialised workshops knew the tricks of the trade. The secrets of the technique and recipes for enamel paint were carefully guarded for centuries and cause for speculation.

The fact that the maker, Pierre Courteys, monogrammed this tazza with his mark, implies that he regarded this drinking vessel as a piece of art. Such showpieces were not meant for household use. They were proof of the collector's status and intellect and were made for the owner's enjoyment. 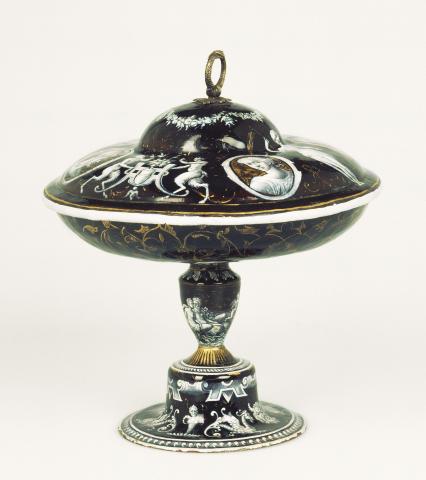