A cocktail foraged in Rubens' garden

The Food Archaeologist went foraging in Rubens' 17th-century city garden and brought along mixologist Hannah Van Ongevalle. Together, they created Rubens' secret, a cocktail/mocktail that blurs the boundaries of time and invites us to the master's garden party.

In August 1638, Rubens, who was staying at his country house in Elewijt at the time, wrote the above to his housekeeper in Antwerp, asking that the gardener "send early summer pears and fresh figs, if there are any, or anything else attractive from the garden".

Rubens' fresh garden figs from 384 years ago form the basis of a refreshing treat on Museum Night. A syrup made with fresh figs and floral honey is flavoured with exotic imports such as ginger, aniseed, and citrus. All the flavours are squeezed and infused to the last drop to ensure nothing is lost. Dark rum provides liquor & spirit, while ginger beer adds spice to the less intoxicating version.

Cocktails were as yet unknown in the 17th century. Still, the basis for this kind of drink was created in a variety of sweetened and spiced wines and the increasing popularity of spirits.

Brandy was being distilled in the centre of the city and evidence of this comes from the archaeological discovery of the "Gebrandewijn Huys" near the brewers' quarter of Kammenstraat. The cesspit overflowed with ingredients that added flavour to the spirits being distilled there. Initially used for medicinal purposes, brandy saw a steady rise in use in elite circles from the 16th century onwards. In Rubens' time, it was already intoxicating a large proportion of Antwerp's population. Rum was barely known of in the decaying port city at the time. It slipped through the gaps of the blockaded Scheldt in dribs and drabs via the bony seamen who had sailed to the sugar cane plantations in South America. The raw cane sugar that was being unloaded at the refineries of Suikerrui came with the stench of rum on it, in addition to the blood and sweat of the slaves.

Rum had originated in Brazil and the Caribbean as a fermented alcoholic beverage that was a by-product of sugar refining. It was far from perfected in Rubens' time and was, in fact, regarded as an inferior, almost undrinkable tipple for slaves and shipmates. It was known among English-speakers by the name 'kill-devil'. Later, rum became more refined and gradually found its way into the quality-product market in North America, where it became the basis for punch in the 18th century.

Along with sugar, the spice trade was responsible for Antwerp's prosperity in the 16th century. It laid part of the foundation of the family fortune of Rubens' patrons. The heavier the food and drink was spiced with flavourings like ginger, cloves and aniseed, the more powerful the host who was supplying the treats. Chilled wines richly flavoured with sugar, honey, and spices has been trendy since the late Middle Ages. After Rubens' time, the trend passed its peak and flavours became more balanced.

Garden landscaping was equally influenced by the latest trends. These were compiled in handy little books that very soon had a cooking section attached to them. Therefore, not only Rubens' gardeners, Willem and Jasper, but also Willemijn, the kitchen maid, were with the times. In the enclosed gardens of the elite, south-facing walls provided the right conditions for growing Mediterranean fruits, and this meant that grapes and also figs in particular could be harvested fresh. Citrus trees were grown in pots and placed indoors during the winter months. The fruits harvested would not always have been the best quality, however. As Rubens himself wrote, the garden did not offer something attractive every year. Fresh, exotic, high-quality fruit, such as orange, lemon and lime, reached the market mainly via Mediterranean merchants.

The 17th-century summer gardens overflowed with fragrant and flavourful herbs and flowers, whose pollen and seeds blew into the latrines, giving archaeologists an insight into the pantry. Finally, they flavour our drink, tickle our nose and caress our eyes.

We are still waiting for the archaeological investigation of the finds in Rubens' secrete or latrine.

In the meantime, you can still enjoy a taste of Rubens' secret anyway.

Fresh from the cesspit in your glass

The makers of the cocktail

The Food Archaeologist has had enough of the reburial of archaeological stories in dusty repositories and boring reports. Discover the lost story of our ancestors' daily survival. A story that is more topical than ever.
Through unique food experiences that focus on taste, smell and touch, The Food Archaeologist reveals a timeless story of purity, tradition, craft, sustainability, diversity, sensory experience and slow enjoyment. 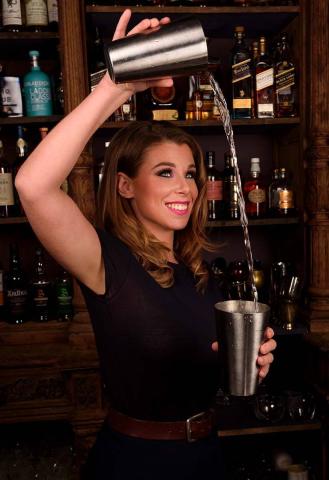 Hannah Van Ongevalle is renowned as a mixologist both nationally and internationally. She is ravishing, ambitious and definitely quirky, and this, along with her fresh perspective, makes her the ideal person to create a new cocktail that celebrates heritage.

* The cover photo is a stock photo of a similar cocktail. Want to know what the cocktail will look like in real life? Then be sure to come along on Museum Night on 6 August 2022!