Three painters collaborated on this elegant painting: Rubens painted Diana and her companions, De Vos the animals and Wildens the rolling landscape. This practice, so common in seventeenth-century Antwerp, enabled each artist to contribute what he did best.

Crowned with a diadem with a crescent moon, the Roman goddess Diana pursues her prey. Two nymphs and an eager pack of hunting dogs join the chase. Teeth bared, noses leading the charge, the dogs scramble ashore and leap toward the graceful stag and doe that seek to elude them.

Undoubtedly commissioned by a wealthy patron, the painting must originally have adorned grand quarters, perhaps in a palace or hunting lodge, its subject an echo of its owner’s pastimes and appreciation for classical mythology. 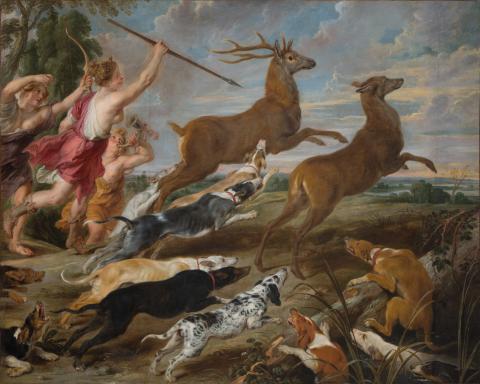