The subject of this small sketch is taken from Boccaccio’s (1313–75) famous Decameron.

Cimon, a handsome but boorish noble, was put to work in the fields by his father. While walking in a grove by a stream he discovered the sleeping Iphigenia. Enraptured by her beauty, Cimon instantly fell in love with her. The power of love enabled him to overcome his foolishness. He eventually won Iphigenia’s affection and they lived happily ever after.

Cornelis Schut was a painter and tapestry designer, who had worked in Rome and Florence. Around 1628 he returned to Antwerp. 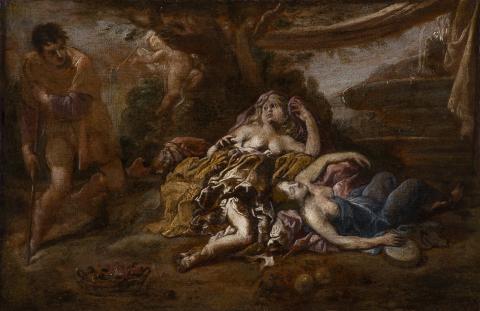